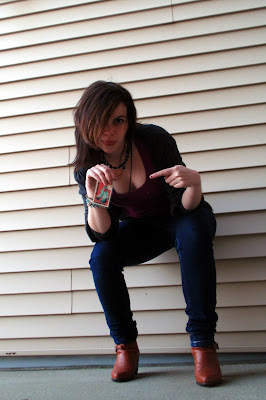 For those of you just tuning in, I spent most of the coldest span of days in recorded NC history at a frikkin' Anime con in Concord (technically) NC. The reasons for going are explained in this pie chart. 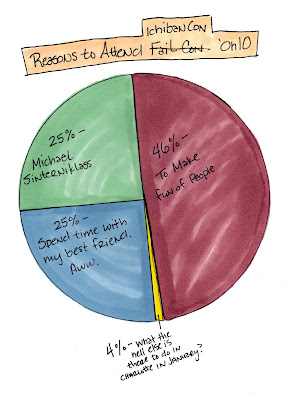 The convention was a blast. We had a great time laughing about the mass amounts of terrible Naruto cosplay. This one girl made up her own character. To make the costume she cut up a pair of jeans and she duckt taped one of the legs to her arm. On the bare skin! Unfortunately I completely struck out in the picture department. Part of my intent for the weekend was to bring you guys multitudes of comedic photography to eventually get loaded to cosfu. But alas, somewhere between a 2 am Rock Band tournament and getting my car jumped because it was too cold for my battery to function, I failed you. And let me tell you, there was plenty to photograph. Ah well.

So when you walked into the con, the first thing you noticed was the size. I know size doesn't matter and all that but... 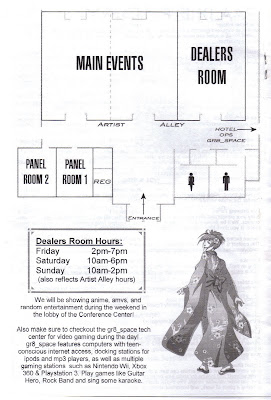 Really you guys. A map? Did you think people were going to get lost? "Oh my god I'm lost!Let me check my map." 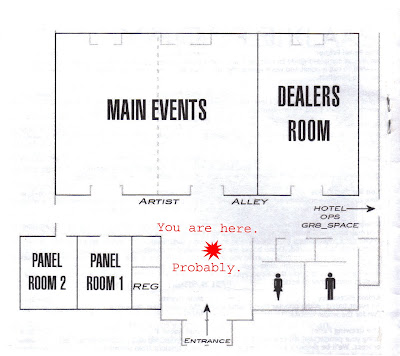 We competed as the only masters in the cosplay on Saturday night. (as the only people in our category we ended up not being recognized for an award at all. It felt kinda like being snubbed by the dumb kids for getting all A's) Britt pulled an amazing costume out of her ass at the last minute. Again. Man she looks cool though. She ends up just about seven feet tall in the geta. We even had some girls pose with her for size ref. 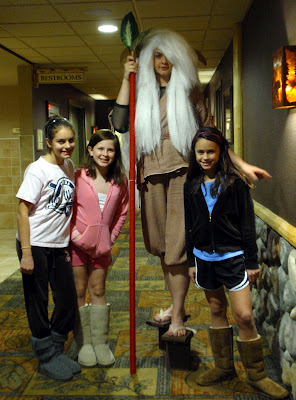 Didn't catch their names, but they were pretty cool kids.

So before you start asking if she is an elf or an ogre, she is a Shiftry Gajinka (an anthropomorphic pokemon) This is the basic look. 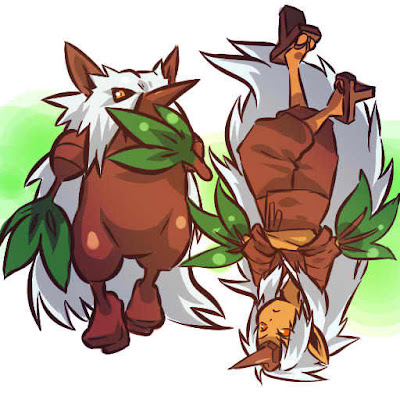 She didn't get the costume quite finished, but the effect was the same. 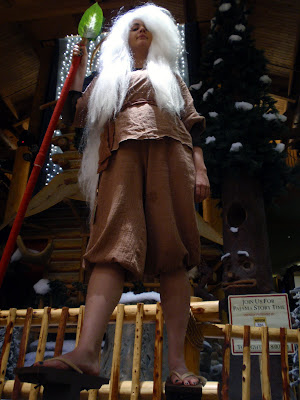 She couldn't walk past someone without hearing a "holy crap" or "Oh my GOD!" 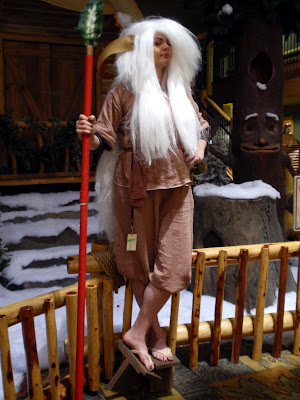 When we went to the lodge to take photos, the regular (non con going guests) were both enchanted and horrified. 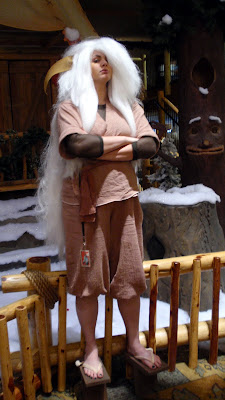 The children were mostly enchanted, the parents mostly horrified.
The kids seemed delighted by the idea of wearing costumes all the time. (i'm totally with them) This one little boy watched a group of costumed nerds walk past and exclaimed "Daddy, It's just like Halloween!" Adorable.

As always she made everything with the exception of the fishnet shirt. In three days. 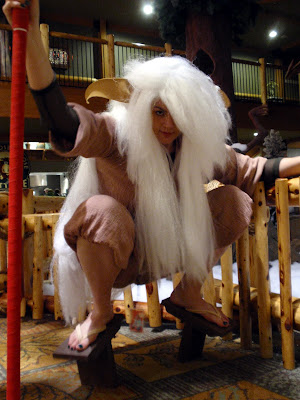 Yes, even the wig. And that wig is a beast.

One of the biggest draws to the convention for me was Michael Sinterniklass. 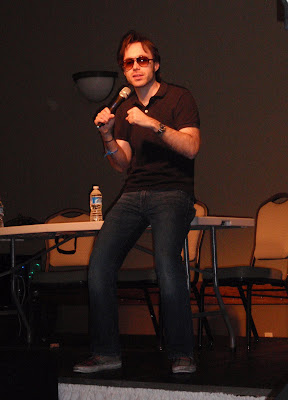 He is a voice actor and happens to voice Dean Venture on my favorite show.

I have a serious obsession with the Venture Brothers, so meeting Micheal in May of last year was a total treat. He really seems to love doing what he does (voice acting in Anime and American cartoons, directing, producing) and it shows. He was super nice and such a big ol' geek. He's quite approachable, and he will approach you if you give him a reason. Like appearing sleepy at his panels. 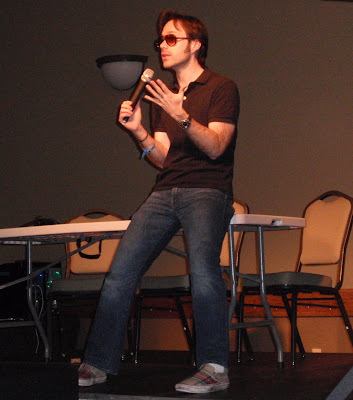 So I show up to the first panel he's in and of course He catches me yawning. (Rockin' out till 5 am took a toll on me) He waggles a finger at me and snickers. After the panel he follows me to make fun. He queries if he's being too boring. I laugh him off and awkwardly sidestep my way out. The next panel he's late for and i am actually resting my eyes beneath a pair of over sized sunnies. I open my eyes to him hovering over me. "I haven't even started talking and she's asleep!" 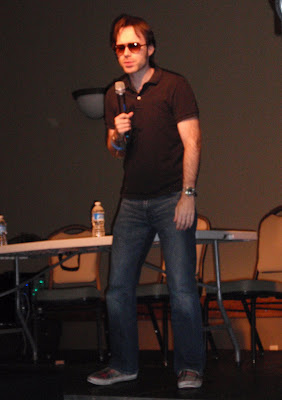 He called me "sleeping girl" all the rest of the weekend. He was completely Hilarious in all his panels. I really do just adore him. Check out how he signed my copy of VB season two. 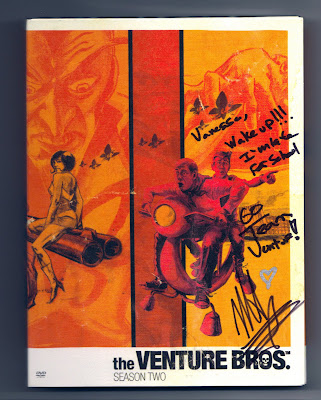 Awesome!I can't wait 'till Animazement. I really hope he can come again. Especially since it's looking more and more like Venture Brothers costumes are going to happen. Wendy and Todd were also great to listen to. Wendy has been in the biz for years and her take on acting was interesting. She also does yoga and actually demonstrated how high she can lift her leg to show off her super cute boots. Todd was so adorable, and such a nerd. I really enjoyed his panel on stage acting. I used to be into to it and wanted to act for a living 'till school sucked all the joy out of it. So it was nice to hear from someone who loves it. Still. 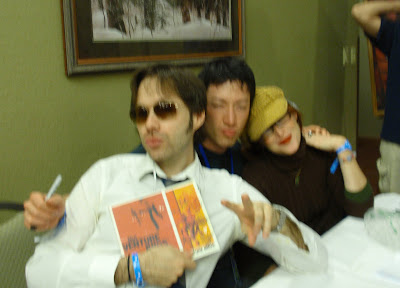 Terrible photo. I know. Sorry.
I would love to talk to all of them when there isn't mass hordes of 15 year olds asking them to do voices.

I mostly managed to avoid cameras while in my costume that may or may not have been a(n intentionally) terrible Pikachu Gajinka. I played it mostly low key and went with jeans and tee's all weekend. It was comfortable, dammit. Anyway, this was what I wore Sunday. 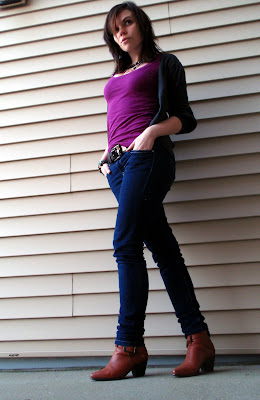 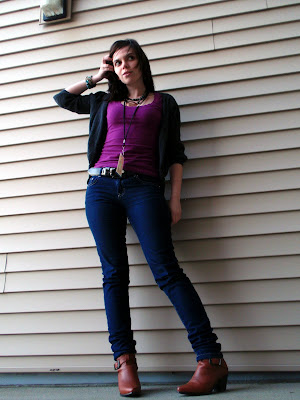 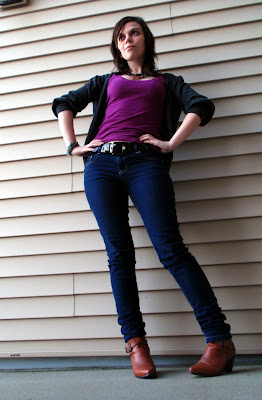 I'm really loving these boots. I bought them on Ebay on a whim and didn't see too much use for them once they arrived. Now I wear them minimum once a week. Always seems like the stuff I just get on a chance turns out to be my favorite stuff. Anyway i love them now. They jingle like spurs when I walk. Makes me happy.

I don't get many vacations so this was definitely fun and cheep! Over all, this was an enjoyable weekend. God this post took forever to put together. I hope you guys enjoy!
Luv
-Vanessa*
Posted by Vanessa* at 7:24 PM