A story about a dress. 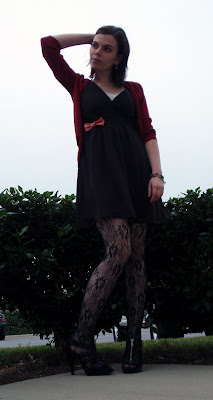 As I have previously stated, I don't currently have a great deal of disposable income. So I have been rummaging about the items I own that I don't really wear. I reorganized my closet and got rid of some of the garbage, but I also unearthed a few gems. One of which was this brown dress. I loved that it was a v-neck and empire cut, but it dipped so was so low in the front and back that my bra showed on both sides! Also the brown is a great color but i feel mousey wearing it alone. So it continued to languish in my closest, unworn and unused. Finally, I was playing dress in my room one day (like a big grown up) and I discovered that a beautiful vintage pleated slip fit underneath perfectly. It covered up all the too low dips, and added a bit of sweetness like a dollop of whip cream. I only needed the cherry on top. I set about to make an adorable accessory. Currently, I'm having a deep obsession with bows. Probobly from reaching my mid twenties and desperately attempting to hold on to some form of little girl-hood. Therefore bows. I went for red and cream stripes so it would pop on the dark chocolate back drop. I stitched the bow onto a pin back because I can't commit to the permanace of just stiching it on, topped it off with my favorite red sweater, and voila! 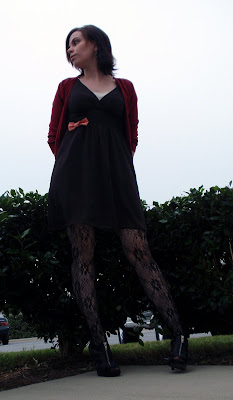 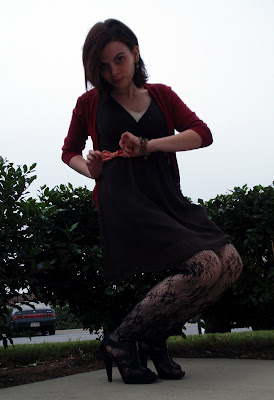 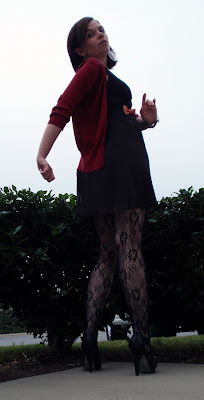 Sugary sweetness achieved! I wore lace tights for texture and the heals to grow the while thing up a bit. Too bad the photos were kinda crummy, because I felt adorable!
luv,
Vanessa*

ps- i joined Weardrobe
Posted by Vanessa* at 7:23 PM